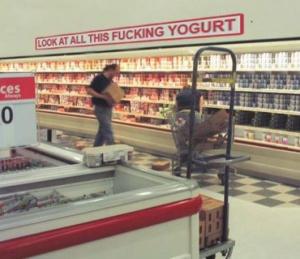 Yoghurt, yoghurt, yoghurt. For the past three weeks or so, my every spare minute has been oozing with yoghurt. Eww. Not literally, thank goodness. I’ve been writing a category report on yoghurt and pot desserts.

Oh, but the language. The language of press releases, of the internal workings of brand identity, of fmcg. It is a terror.

I work in my kitchen, so I read these things with an oven nearby. A gas oven, temptingly near to my head. Do you know how dangerous that is?

The point of a press release – or, indeed, any information given to the press – is to deliver information to journalists, who in turn deliver it to their readers. In this case, the feature was for The Grocer magazine, so the readers are suppliers, retailers, wholesalers, farmers and the occasional member of the public with an unusual taste in recreational reading. Above all, they’re people, not robots. Therefore, there is no reason to talk to them of “eating occasions” when you could say “meals and snacks”.

However, very few press releases are actually written with the reader in mind. Instead, it’s all about the company and what they want to shout about – in their strange private dialect. But if you write your press releases in simple, direct, meaningful words, you stand a much better chance of getting your message across.

So I’m going to be radical and take some real phrases that were sent to me and put them in nice, simple, human English. I know, I know. Try not to get too excited.

As I say, the press officers I dealt with were by and large incredibly professional and efficient. What I’m complaining about here is not them, but the kind of language that has become commonplace in fmcg. Commonplace, you say? Then what’s wrong? What’s wrong is that it’s only commonplace within the industry – the reader has a right to expect direct, no-nonsense language.

It wasn’t all bad, though. Take this from Danone. “You’ve been hit by some smooth caramel.” (Dananana nana na na nana na na) – that’s just great.

And there was my friend telling me what she and her husband got up to with a pot of yoghurt while on holiday in Greece. That too. In fact, I think the two of them may have damn well expanded the yoghurt usage occasion further, what with pleasure being their key need state and all. (They’ll be eating plants next.) I’d like to dedicate the photo above to them. Treaty!