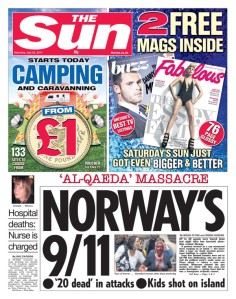 It’s difficult to put out a newspaper when a major event is still under way. So it’s totally understandable that The Sun has the Norwegian death count at 20, when it’s now estimated at “at least 81” (Guardian).

It’s also understandable that many people last night, before the full facts emerged, thought this could be an al-Qaeda attack.

It’s not, however, acceptable to attribute the attack to a particular group when there is no evidence. EVEN IF YOU DO PUT IT IN INVERTED COMMAS.

The final sentence on the front page says: “Witnesses claimed the gun maniac was blond with blue eyes and spoke Norwegian – raising fears that he was a homegrown al-Qaeda convert.”

Blond? Blue eyes? Norwegian-speaking? While those “fears” were not entirely unjustifiable, there could be plenty of other explanations.

I am working at a national newspaper today. I mentioned this, on the subs’ desk. One person responded that “well, al-Qaeda aren’t likely to mind” and another said “you can hardly lower their reputation”.

Fair, and fair. But what about relations between religious groups in our own country? Are they worth jeopardising, for a fiction, for a headline? It is a sad enough day, without this.

The later edition has been changed to use the words “hunter killer” instead.

Edited to add: The killer later turned out to be Anders Behring Breivik, a Norwegian far-right terrorist. He killed 77 people.

Did you see this groundbreaking story in the Metro yesterday? 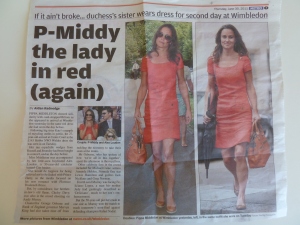 “We’ve been stalking Pippa Middleton. Yes, she who has the misfortune of being sister to the lass who married the prince, and is now public property. It’s OKAY for us to stalk her, make wild claims about her love life and monitor how often she changes her clothes. Look! She’s practically ASKING for it. She’s out in public, ferchrissake!

“She’s not very interesting, we must admit. Not dumping that boyfriend anywhere near as quickly as we’d like, not falling over drunk, not accidentally losing control of a breast, dammit.

“But LOOK! She’s wearing the SAME DRESS TWO DAYS RUNNING! Stinky cow. Dirty mare. At least she changed her shoes. Wassat? Oh yes, we are in principle in support of the rich not ridiculously flaunting their wealth. And yes, I suppose we have, on occasion, maybe worn the same thing twice. But that’s not the point! Didn’t you see? Same dress twice. She’s either an absolute slob, or she DIDN’T GO HOME LAST NIGHT. Bet she was with Prince Harry. No doubt about it.

“What? So what if she’s with her boyfriend? Who is he anyway? She was with Harry. Look how she’s matched the shade of her (two-day-old) dress to his hair and freckles.”

Yes, I’m pretty sure that’s what they meant. But here’s my favourite bit.

“She would be forgiven for being relieved not to be linked with Prince Harry, as the media focused on his new romance with Florence Brudenell-Bruce.”

May I translate again?

“We will NEVER forgive her for being so damn uncooperative and refusing to shag Harry. That would have made a much better story. In fact, we tried our damnedest to write that story anyway. He calls the knickerless wench Commando, remember. If THAT’S not foreplay, what is? This Loudon just won’t get the message. Didn’t he read our story Pippa Middleton and Alex Loudon ‘have split’? Guess he took those quotation marks seriously.

I came in to work today to find this letter on my desk. It reads:

Sorry, but I am not going to allow you to get away with it:

“bacteria” is NOT a singular noun!

I ask your organisation yet again. Why perpetuate ignorance? After all, you have so many “experts”!

Please do not reply , if your intention is to defend the indefensible.

I plan to write many, many letters like this when I retire. Watch out everyone. 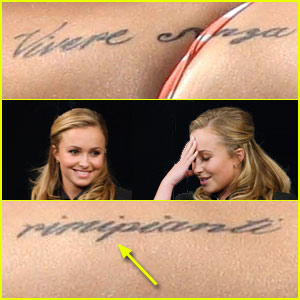 I do feel sorry for poor Hayden Panettiere. Lovely tattoo, shame about the spelling.

Well, in so far as someone stupidly rich and pretty can be felt sorry for, anyway. But a misspelling forever attached to the body? That’d make me pretty sad.

Perhaps I will suggest she employs me as a kind of anti-bad-spelling bodyguard. I’d have to brush up on my Italian by a few thousand percent, but I believe I have potential.

And as my erstwhile (boom!) colleague Charlie points out, she probably needs someone spell-friendly on hand to help with that crazy surname anyway. 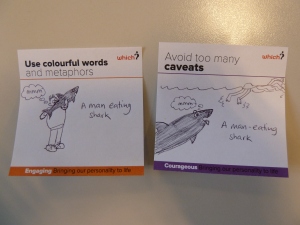 Just a warning: I will have serious concerns about the sanity of anyone who responds to this post. I shall take it as a sign that you’re either utterly depraved or a masochist of the worst kind. Or perhaps that you’re procrastinating and trying to avoid something even worse – that would be the most understandable excuse.

Here – dah dah dahhhh – is an entry I have written for the new Which? style guide. And when I say new, I mean new. For the year that I’ve been working here, the general style guide situation has been “well we used to have one, and it’s still online, but you probably shouldn’t use it as it’s out of date and we’re making a new one but you can’t really use that either yet”. Which is to say, we haven’t really had one.

Of course, I haven’t spent the past 11 months grumbling about that *at all*.

Anyway, the style guide is now happening. I will not live to see it (okay, okay, I’ll hopefully live to see it, but I won’t be in the office to see it), but it is at least in progress.

What my grumbling has earned me, however, is the dubious honour of being asked to write a few bits for it. It’s quite tricky, as our writers are not, primarily, writers. They’re titled “researchers”, and indeed, research is the bulk of what they do. As a result, the level of language awareness varies greatly.

And that is a very longwinded way of saying… do you think the tone of this is too basic/patronising? It’s here: Hyphens and dashes.

VERY EXCITING UPDATE: Following the comments by Freelance Unbound, Andrew and Rory (below), there has been a REVOLUTION on the subs’ desk. Kind of. We are simplifying our style on login and setup. So now, log in and set up as verbs, and login and setup for all other purposes. Sorted.

Here’s a little post for everyone who joined me in getting excited about MoTs and MOTs earlier.

The first thing I noticed when I opened the document was that it was peppered with MoTs. They kind of leapt off the page. But it wasn’t just their ugliness that jarred, it was also the sense of it. We know them as MOTs. MOT tests. We don’t think about what it stands for – and yet that little ‘o’ implies that we do.

However, when people say “the car’s going in for an MOT”, they’re not referring to the department, they’re referring to the test. Largely they don’t even know what it stands for. MOT has come to mean “annual test of roadworthiness”. The meaning is direct, and the middle-man spell-out has become obsolete.

(I’m sounding a bit protestant here, aren’t I. Totally accidental, I swear. But if I were being militantly protestant, which I’m not, then I’d say the Ministry of Transport was like the Pope. I’m stopping now.*)

So, if ‘MOT’ now carries the direct meaning, I think that ‘O’ deserves to be upper cased. Those who insist it should be lower case should go the whole hog and make it a DfT test.

And you know what? A minor miracle occured this morning: I made this case here at Which?, and… the style guide has been changed. HURRAH!

UPDATE: the Guardian has just changed its style accordingly. WOOP! Here it is.

One of my colleagues just asked me how my blog was going, and I breezily replied that I hadn’t written much recently because I hadn’t found any interesting tidbits. This was, I then reflected, a BIG FAT LIE. The truth is merely that I’ve been a bit lazy. So I have now gone back to him and confessed such.

I have no huge rants at present, but I do have the following small offerings:

My ex chief sub, the excellent Kit Davies, sent me this link to an article in The Independent today. It’s a photograph of the moment the tsunami hit a beach in Odaka, Japan. The caption below the picture reads: “Below the waves, you can see the wreckage of an uprooted truck destroyed by the earthquake minutes earlier.”

There are five reader comments below the picture. Two are about the tsunami, and one is about I don’t know what. (“Close enough for government work.”) The other two are complaints about the language in the caption.

The words “uprooted” and “destroyed” are entirely inappropriate here, trucks don’t get uprooted because they aren’t rooted to the ground in the first place. It would be a pretty useless truck if it were rooted to the ground. And it’s not been destroyed either, it’s been tipped on its side and can be tipped back upright and driven off.

This isn’t a tabloid so cut out the hyperbole and present the plain facts.

I agree with him. In fact, I’d go one further and say that any kind of descriptive language, even if accurate, is unnecessary here. The photo says all that there is to say. The caption should cover what, when and where – just that.

There’s a time and place for descriptive language – and it’s not when the facts say more than words ever can.

I noticed something far worse in this article in the Metro last week, in a story about how Japan is struggling with the vast number of corpses following the earthquake and tsunami. One week on, we’ve grown used to hearing about body bag and coffin shortages, temporary morgues and overwhelmed crematoriums. But when I read this story, it was the first time I’d considered this grisly aspect of the disaster. So the insensitivity of the language struck me doubly.

Crematoriums were overflowing and rescue workers ran out of body bags on Monday, as the country struggled to cope with its worst disaster since World War II.

In the town of Soma, the crematorium was unable to cope with the crush of bodies being brought in for funerals.

Overflowing crematoriums? Crushes of bodies? Surely this kind of language isn’t called for. The facts, in a story such as this, are quite enough.
I’ve plumped for crematoriums over crematoria, although initially my instinct was to go with the latter. I did so because of the two style guide entries below, from The Times and the Guardian respectively. I don’t want stadia, conundra or fora, so I guess it’s only fair that I can’t have crematoria either.
The Times:
referendum, plural referendums, as with conundrums, stadiums, forums and most words ending in -um. But note millennia, strata
The Guardian:
Latin Some people object to, say, the use of “decimate” to mean destroy on the grounds that in ancient Rome it meant to kill every 10th man; some of them are also likely to complain about so-called split infinitives, a prejudice that goes back to 19th-century Latin teachers who argued that as you can’t split infinitives in Latin (they are one word) you shouldn’t separate “to” from the verb in English. Others might even get upset about our alleged misuse of grammatical “case” (including cases such as dative and genitive that no longer exist in English).

As our publications are written in English, rather than Latin, do not worry about any of this even slightly.